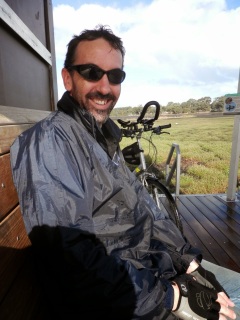 Simon Haynes was born in England and grew up in Spain, where he enjoyed an amazing childhood of camping, motorbikes, air rifles and paper planes. His family moved to Australia when he was 16.

Simon divides his time between writing fiction and computer software, with frequent bike rides to blow away the cobwebs. His goal is to write fifteen  Hal books (Spacejock OR Junior!) before someone takes his keyboard away.

You’ve just released the seventh Hal Spacejock book, Big Bang. With this latest novel, you initially released it in serialised form. How did this different release method work out for you and do you think you will be doing it again?

Hal 7 was my 12th novel, and I desperately needed a new challenge. I’ve always been a chronic rewriter, fiddling with scenes, changing the plot, messing about with characters and so on. But at the end of the day, who cares if a fruit salad has a dollop of vanilla or chocolate ice-cream on top? I found myself dithering over irrelevant details, when I could have been writing more novels. 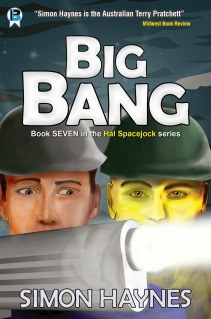 So, the serial. I planned 10 parts of approximately 7500 words each. I promised I would have the next part ready before I published the previous one, which meant people knew it wasn’t just going to fizzle out. This also gave me the opportunity to revise the previous part if changes arose during the writing of the current one.

And it worked. I found myself looking forward instead of back. I wrote quickly, I had no trouble with subplots or fiddly details, and the reviews for book seven have been great.

The only problem was when I reached part ten. Everything had gone so well for parts 1-9 that I decided to publish part nine before I finished the novel. Then I discovered I needed to write about 15,000 words for part ten, to do the rest of the book justice. That took far longer than expected, which meant everyone had to wait for the final part. I’ve had fans writing to me, politely asking whether the next Hal book will also be a serial. When I reply that it won’t be, they seem very happy.

Now, the thing with the serial was that I found it easy to motivate myself to write and publish 7500 word parts. Since I finished Hal 7, I’ve hardly written a word (again). So, perhaps I need to write in serial form, but just not publish any of the parts until they’re ALL done.

As well as the original English, Hal Spacejock is available in French. How did that come about and did you have much contact with the translator?

The translator, Albert Aribaud, instigated the whole thing. He contacted me several years ago, and I referred him to the publisher. Cut a long story short, Albert and I collaborated on the translation between us, and I released the resulting novel as an ebook. Riviere Blanche will be releasing the paperback later this year.

Apart from Hal Spacejock in French, Bastei Lubbe recently released the first two novels in German as ‘Ein Roboter namens Klunk’ (Hal 1) and ‘Helden Heulen Nicht’ (Hal 2). This is a traditional publishing contract, organised by the original Hal Spacejock publisher, Fremantle Press. The interesting thing is that the German publisher picked up on a little in-joke of mine. That is, they released the first Hal Spacejock book with the title ‘A robot named Clunk’, recognising that the entire series is actually about Clunk the robot, not Hal Spacejock.

Over the years people have occasionally posted reviews saying that Hal is a jerk and a little shallow, while Clunk is far more interesting. No kidding. Anyway, it’s good to see that ten years after Hal Spacejock was published, someone saw through that little ruse. 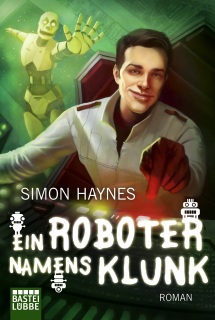 Then there’s Hal Junior … the first novel has been translated into Italian by Lia Desotgiu, and was recently published as an ebook. I have the layout for the paperback edition on my screen right now, and will be publishing that later today after I finish this interview.

Lia contacted me a year or so back after I blogged about translations, and I was highly impressed with her lengthy resume. She’s translated a huge number of famous AAA computer game titles, including one of my all-time faves, Elder Scrolls IV: Oblivion. Lia is also keen to translate Hal Junior 2 and 3.

A french translation of Hal Junior: The Secret Signal, also by Albert Aribaud, is nearing completion and should be published soon.

What I’d really like is a native Spanish speaker for a Spanish translation of my works. I’m fluent in Spanish but not to the degree needed, and I’d love to read my work in that language. So … if anyone’s interested, contact me and we can discuss details.

As well more Hal Spacejock (and Hal Junior?) books, it looks like you’re planning another spin off series about Harriet Walsh. Can you tell us a bit about that?

The Peace Force was mentioned in the first Hal Spacejock novel, and the idea was that they’re the police of the future Galaxy, although with a more military approach to crime fighting. They have a reputation for ruthlessness and brutality, hence ‘Peace’ Force.

Anyway, Harriet Walsh is a Peace Force officer, and she’s a tough, independent character. She seemed to hit a nerve with readers, and I remember one Hal fan emailing me to ask for a short story or novella featuring Harriet. I toyed with the idea, then decided to write a novel instead.

The problem is, writing a futuristic police procedural is hard. Imagine a future where you point a gadget at a bloodstain or a fingerprint, and the suspect is immediately identified and located. E.g. their car stops mid-traffic, the doors lock, and a large transport drone flies out to scoop the car up and deliver the suspect to the nearest station. All while the detective is still sipping coffee at the crime scene.

I don’t quite have the same problem in the Hal novels, because he’s broke and can’t buy any cool gadgets. He can barely afford fuel, and when he finally buys a mobile phone he discovers Galactic Roaming charges would cripple him for about 40 years.

I found a solution for this problem in Harriet Walsh, but I’ve not yet got my teeth into writing the thing. And, in the meantime, the siren call of Hal Spacejock 8: Shaken and Stirred, has pulled me in.
By the way, the Hal Junior series is set 10-12 years after Hal Spacejock, and features Harriet Walsh as the mother. (A lot of people got the idea Hal Junior is just Hal Spacejock as a kid. Including me, when I first started writing The Secret Signal. However, Hal Jnr worked much better as a new character.)

What Australian works have you loved recently?

I confess I haven’t read anything at all for the past two years. About a year ago I got into board gaming by accident, and it’s become a major passion. Like many, I suffered through Cluedo and Monopoly as a kid, but I put all that behind me when home computers burst onto the scene in the (very) early 80’s.

Have recent changes in the publishing industry influenced the way you work? What do you think you will be publishing/writing/reading in five years from now?

I transferred to self-published ebooks (with POD paperbacks) about 3 years ago now. The speed with which I can reach fans influenced my decision to publish Hal 7 as a serial. It also triggered the wave of translations, and I’m keen to continue with those.

I have plans for a present-day thriller, and a friend and I are planning a collaborative novel which is just a bare-bones idea at the moment. To that end I’ve been modifying yWriter (my free novel writing software) to add collaborative features so that two authors can work together on the same novel, in realtime. Right now it’s using Google Drive to store data temporarily, which is just a stop-gap until I work out something better.