DK Mok is a fantasy and science fiction author whose novels include Squid’s Grief, Hunt for Valamon and The Other Tree. DK has been shortlisted for three Aurealis Awards, a Ditmar, and a Washington Science Fiction Association Small Press Award. DK graduated from UNSW with a degree in Psychology, pursuing her interests in both social justice and scientist humour. DK lives in Sydney, Australia, and her favourite fossil deposit is the Burgess Shale. Connect on Twitter @dk_mok or find out more at www.dkmok.com.

Squid’s Grief is both an excellent title, and features such an amazing main character who is basically having the worst week of her life. Will we get to see more of Squid in the future, and see how things turn out with her pal Grief? 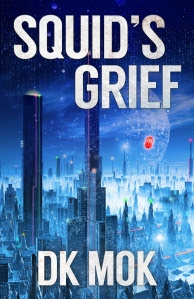 Thanks! I love cephalopods, wordplay and unusual names, so the stars aligned nicely for the title. I drew deeply on stylised noir for this book, particularly from the stories that had an impact on me during my teen years, like Ridley Scott’s Blade Runner, Mamoru Oshii’s 1995 Ghost in the Shell, and Raymond Chandler’s Philip Marlowe detective novels. I’ve always loved the sharp, wry banter, and the intriguing, silty underworlds inhabited by people with names like Bruiser and Kneecaps. Or Squid and Grief.

Ah yes, poor Squid. She has a bit of a tough time in this story, but she also has some pretty amazing moments. Often, it’s in our darkest times that we learn our true nature, and I believe that we’re defined in many ways by the choices we make when between a rock and hard place: whether we stay silent and keep our heads down, or stand up, speak out, and fight for the things that matter to us.

While no one wishes for a troubled life, it’s sometimes the challenges we face that teach us gratitude, empathy and resilience. Yes, it’s a hell of a ride for Squid, but there are moments of beauty and kindness along the way. And jam rolls.

I don’t have any current plans for a sequel to Squid’s Grief – there’s an unruly procession of other stories demanding to be written first. That said, I always have ideas kicking around, so you never know. 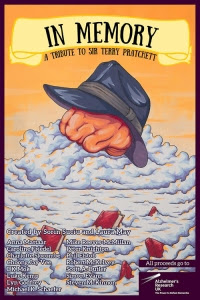 You have a piece titled ‘The Heart of the Labyrinth’ in a tribute anthology to Sir Terry Pratchett. What is your piece about, and what does Pratchett mean to you?

Much of who I am today, as a writer and as a person, is due to the wonderful work of Sir Terry Pratchett. I discovered his books in high school and was swept away by his wildly imaginative worlds and the strange and endearing characters who inhabited them. His books eased me through difficult times, and I found solace in the humour, and sanctuary in the fantasy. And then, of course, there was the rage.

In the foreword to Sir Terry’s collection of essays, A Slip of the Keyboard, Neil Gaiman paints a picture of a man in possession of not only great wit, charm and intelligence, but also great passion and ferocity. He speaks of the rage that fuelled Pratchett’s stories: rage against ignorance, bigotry and corruption. Pratchett’s stories had heart, but his satire had teeth. His fanciful tales of wizards and vampires were also powerful allegories exploring issues of diversity, equality, integrity, and the importance of not remaining silent in the face of injustice. Over the course of twenty years and fifty books, he taught me that you could tell stories that were whimsical and uplifting, but also purposeful and powerful. Ultimately, for me, his stories were about courage and kindness.

In early 2015, Sir Terry passed away from early-onset Alzheimer’s disease. Like many others, I struggled to imagine a world without his wit and wisdom and generosity, and like many others, I grieved in my own quiet way. Some weeks afterwards, I came across a call for submissions; an anthology was seeking short stories for In Memory: A Tribute to Sir Terry Pratchett. All proceeds would go to one of Sir Terry’s favourite charities, Alzheimer’s Research UK.

I had to be in it. I was frantic – the deadline for pitches was only days away; I’d never pitched to an anthology without having a story already written. But I had to be in it. Over the next few days, I desperately rattled my brain. I scribbled and scrunched and fretted and paced, and as I walked brooding circuits of my neighbourhood, my thoughts turned to a podcast I’d listened to once, an episode of Off Track with Ann Jones. In it, she and her guest spoke about walking meditation and told the tale of how the Centennial Park Labyrinth in Sydney came to be. And so, I had the spark of my story.

“The Heart of the Labyrinth” is an epic fantasy adventure about a beast known only as the Devourer. He dwells in an ancient labyrinth, with no recollection of who he is or how he came to be there, although he suspects that long ago he bore another name. He’s sick of eating adventurers, so when a young woman arrives and declares she’s here to rescue him, the Devourer persuades her to join him on a search for his forgotten past.

The originating editor of the anthology, Sorin Suciu, describes In Memory as “a rebellion against the act of mourning”. And, in some respects, this project was a collective act of grief and remembrance. For me, it’s as true now as it was then: there is solace in humour, and sanctuary in fantasy. And there is comfort in sharing your grief with others, and saying, “This. This is what he meant to me.”

And so, my story is about memory, identity and redemption. It’s about humour and rage, courage and kindness.

“The Heart of the Labyrinth” is my way of saying “goodbye” to Sir Terry: a wonderful author and humanist whose legacy lives on in the countless people he touched through his work. All those hearts he helped to heal through laughter. All those minds he helped spark through his conviction.

Sir Terry’s stories inspired me to be braver, kinder and wiser than I was, and this story is my quiet tip of the hat to a man who will be deeply missed.

What can we expect from you in the near future?

I always have several projects ambling about in various states of development and disassembly. I’m in the early stages of a new epic fantasy trilogy, but it’s turning into a far more complicated project than anticipated. There are pages of family trees, maps, regional glossaries and magical arithmetic swamping my desk at the moment, but I’m excited to see if I can wrestle these into the sprawling story I want to tell.

After that, I have another science fiction novel planned – this time with actual cephalopods in it. I’m very keen to write this one, but the story is still coalescing into shape.

In the meanwhile, I’m usually tinkering with a few short stories. Any excuse to play with pensive robots and enchanted labyrinths.

I’m very behind on my TBR list, but having an overabundance of good books to read is a nice problem to have.

Shaun Tan is one of my favourite authors/artists, and I’ve just finished reading his latest book, The Singing Bones (Allen & Unwin). It’s a haunting collection of artworks inspired by the fairy tales of the brothers Grimm. Stylised, hand-crafted figurines of clay and sand and string are photographed in strikingly stark dioramas, and each image perfectly captures both the fanciful and gruesome aspects of the tale it accompanies. As a side note, I’ve mentioned this before, but I’ll continue to say it at every opportunity: Tan’s The Rabbits (written by John Marsden) and The Arrival should be compulsory reading for everyone.

I’m looking forward to Mitchell Hogan’s A Shattered Empire, due out later this year from Harper Voyager. It’s the third book in the Sorcery Ascendant Sequence, an epic fantasy, coming-of-age story with a fascinating magic-system. It makes me wish that our world had enchanted origami.

I’ve loved Graeme Base’s picture books ever since I plunged into the intriguing and whimsical worlds of Animalia and The Eleventh Hour as a child. Every new book is still a delight, and his recent release, Eye to Eye (Penguin Australia), is another gorgeously illustrated journey through pristine mountains and luminous seas, full of secretive snow leopards and excitable octopuses.

I’d also like to give a shout-out to my lovely sister, Anne Mok, whose debut novella, Tower of the Ice Lord, came out last year through Dreamspinner Press.

He’s not best known for his books, but I’d love the opportunity to chat with Sir David Attenborough. I’ve always adored his documentaries, and in high school, I read as many of his natural history books as I could find: Life on Earth, The Living Planet, The Trials of Life and more. His memoir, Life on Air, is still one of my favourite books. To me, his tales of vibrant jungles and elusive islands were as fantastical as the realms of Narnia or Middle-earth.

I’ve always admired the clarity and accessibility of his writing: a conversational style that brims with intelligence and insight, warmth and wonder. I had the good fortune to hear Sir David speak at the State Theatre in Sydney many years ago and found him to be a masterful storyteller. He captivated the audience with his eloquence, charm and good humour, and his passion for the natural world and all its marvels was absolutely electric.

A great deal of my writing is still informed by my love of science and natural history, and Sir David’s books and documentaries have played a significant role in fuelling those interests. I suspect his charming company and fascinating anecdotes could make a long flight pass by in a blur of lush corals, magnificent quetzals and curious whale sharks.