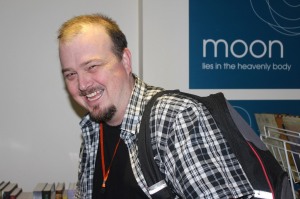 Grant Watson is an Australian award winning playwright and critic. In 2010, he received the Perth Theatre Trust Guild Equity Award for Best New Play for his political drama Cry Havoc. He is a two-time recipient of the William Atheling Jr Award for science fiction criticism and review, including one for his ongoing column “The Bad Film Diaries” in Australian science fiction journal Borderlands. He blogs about media and science fiction films at The Angriest & FictionMachine.

You have a book coming out soon from Twelfth Planet Press! What do we have to look forward to with Something New Can Come Into This World, and what does the title actually mean?

Something New Can Come Into This World collects the first year’s worth of essays from Fictionmachine, which is a website where I post essays about movies. Since the age of about seven I have been fascinated by how movies are made, and some years ago I realised that knowing *how* one was produced often answered the question of *why* certain elements of them were good and bad. The essays combine “making-of” information with criticism in a hopefully entertaining fashion. The essays are all still online for free as well – the book is for people who don’t feel comfortable reading 80,000 words of criticism and filmmaking stories off a computer monitor or smartphone.

The title comes from one of the essays – each essay uses a line of dialogue from the film as its title. The longest essay in the book is based around Andrew Stanton’s John Carter, and it was one with which I was particularly happy. It’s a new book, so “Something New…” seemed to have an appropriate ring to it.

I was so excited to hear about your recent production of a futuristic all-female Coriolanus on the Melbourne stage. What was the process like, of adapting the play, and what did you take away from the experience?

Adapting Coriolanus pretty much came about like this: I was asked if I was interested in directing an all-female Shakespeare production, and I said yes, and then in conversation with the producers we settled on adapting Coriolanus. The choice was kind of deliberately provocative: the play is aggressively masculine, and so presented the largest challenge we could think of in terms of turning all of the characters into women. We were very firm on the idea that the cast should play female characters, rather than continue to play male versions.

The only significant changes to Shakespeare’s script were swapping over the pronouns from “he” to “she” and so on. Turning the word “man” into “woman” turned out to be a small challenge, since with much of Shakespeare’s dialogue you have an iambic rhythm going on and the additional syllable throws the meter out. I had the first crack at adapting the dialogue and then we continued to workshop the lines as a group during rehearsals. Beyond that we pretty much left it verbatim – the only male referenced in our script was somebody’s horse.

The setting pretty much came about because I wanted to avoid giving the play a specific historical setting. I didn’t want to set it in ancient Rome, but at the same time I sort of loathe gimmicky Shakespeare productions that pick a different period purely for aesthetic reasons (Much Ado in the 1920s, and so on). The brief that I gave our exceptional designer Laura Pearse was that of a world than had ended, and then everyone had simply stitched it all back together again with what was left. As a result there were clothes that seemed medieval in some ways, Elizabethan in others, and aggressively contemporary in places as well. It was all salvaged and scrambled. While publicising the play I found myself describing the setting as “post-post-apocalyptic”: there *was* an apocalypse, but it probably happened a generation ago.

I think the main thing I took away from the experience is that Australia has an enviable number of immensely talented female actors, and an industry that really does not use that talent enough!

Given your ongoing interest with performance, both as a critic and as a creator, what would be your dream science fictional project to work on, here in Australia?

My dream science fiction project would actually be to write and direct a feature film adaptation of John Wyndham’s Chocky. I adored the novel as a child as well as the 1980s British TV adaptation, but I think it actually has enormous potential as a quite threatening sort of thriller. Imagine having a child that always talks to an imaginary friend, and then discovering one day that the imaginary friend is talking back.

Many years ago I was actually working with a very talented film producer and we enquired about the rights, but sadly they had been bought up for, of all people, Steven Spielberg. A dream shattered!

Defying Doomsday is a recent short story anthology based around apocalypses, but with a focus on disabled protagonists. I thought it was a striking idea and shone a light on a section of society that regularly gets overlooked or dismissed. The range in style, setting and disability across the stories was fabulous. Editors Tsana Dolichva and Holly Kench did a phenomenal job – as did their authors.

Probably not Shakespeare – I’d have to calm him down and explain what aeroplanes were. In the end I suspect my choice would be either Douglas Adams or Iain Banks – I was a fan of both of their writing, and on separate occasions attempted to get them over to Australia for conventions I was co-running. Both men died before I had a chance to thank them for their work.