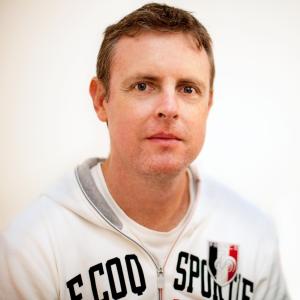 When he was eleven, Mitchell Hogan was given The Hobbit and the Lord of the Rings trilogy to read, and a love of fantasy novels was born. He spent the next ten years reading, rolling dice, and playing computer games, with some school and university thrown in. Along the way he accumulated numerous bookcases’ worth with fantasy and sci-fi novels and doesn’t look to stop anytime soon. For ten years he put off his dream of writing, then he quit his job and wrote A Crucible of Souls. He now writes full-time and is eternally grateful to the readers who took a chance on an unknown self-published author. He lives in Sydney, Australia, with his wife, Angela, and daughters, Isabelle and Charlotte.

What are you working on right now? It’s a novella isn’t it?

I just self published a novella in early July — in my Sorcery Ascendant world — titled At the Sign of the Crow and Moon. A few readers said they’d love to know more about some of the characters, so I spontaneously decided to write a short story featuring Felicienne Shyrise. The story kept growing and eventually ended at 25,000 words. Although it took time away from writing my next novel, I felt it was worth it, especially now that I can use the novella for marketing and promotion opportunities, as well as giveaways.

The third book in my Sorcery Ascendant Sequence, A Shattered Empire, will be released in August 2016! Yay! And I’m also 130,000 words into a stand alone epic fantasy novel set in a different world, which I hope to get into decent shape over the next few months, while writing a second novel set in the same world.

You achieved remarkable success by self-publishing your first book The Crucible of Souls. How has the face of self publishing changed since then?

Self publishing is still going through growing pains. More authors are realising the value of putting a professional product out there, so overall the quality is improving. But they’re now competing for fewer and fewer of the best promotional opportunities – like Bookbub – which traditional publishers are now taking advantage of more frequently. Another issue is the amount of scammers, which Amazon and other online retailers are trying to crack down on. Money which would have flowed to authors is being taken by these scammers, and it isn’t small amounts either.

Another trend I see is self published authors questioning whether they are pricing too low. Many are testing higher price points, which was against prevailing “wisdom” years ago. There’s less of “how many can I sell?” and more of “at what price will I get the greatest return?”.

Are there any plans in the future to return to the world of your Sorcery Ascendent Sequence books?

Of course! I have ideas for two separate trilogies – one set just after this first series, and another set thousands of years earlier. What I end up writing first though, has to be determined by the best option for my career going forward. And by career, I mean what will keep me writing full time. That’s one of the reasons I’m working on a couple of stand alone books first (plus, I need a brief break…). But I definitely have plenty of follow on scenes for some characters worked out!

My reading time has been heavily curtailed for a while due to some major renovations, and the recent arrival of my second daughter. But I did manage to get my hands on an ARC of Squid’s Grief by DK Mok. It’s her first foray into sci-fi, and in her words: “If you like Blade Runner, amnesia stories, and sci-fi adventure with heists, you might enjoy this.” As usual, DK does a fantastic job. It’s a fast-paced and intense, yet thoughtful, tale which expertly balances wry humour and gravity. The end result is imaginative, dark, intelligent and refreshing.

Which author (living or dead) would you most like to sit next to on a long plane trip? Why?

I really, really like to keep to myself on plane trips… In that case, a dead author seems perfect… The first name that springs to mind isn’t a fantasy author either, it’s Agatha Christie. I think she wrote around 80 novels, and is probably the biggest selling author of all time. I think she’d be fascinating to chat with!