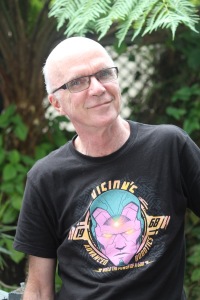 Robert Hood is one of Australia’s leading short story / horror writers (or so some people have claimed). In his long-running career he has published over 170 short stories in major magazines and anthologies worldwide (but mainly in Australia). Many of these have appeared in the collections Day-Dreaming on Company Time, Immaterial: Ghost Stories, Creeping in Reptile Flesh, and Peripheral Visions: The Collected Ghost Stories. He has also written children’s books (such as the co-authored Creepers series), plays and even an opera libretto. His novels are the Shades YA series (Shadow Dance, Night Beast, Ancient Light and Black Sun Rising), Backstreets, and Fragments of a Broken Land: Valarl Undead. He has been shortlisted many times for both the Aurealis and Ditmar Awards (and has won a couple of times), as well as other writing awards.

What writing project are you tinkering with right now?

Back in the 1990s I wrote a couple of short stories that were essentially crime noir, featuring a character named (rather archetypically) Mike Crowe. He’s a sort of criminal handyman – an ex-PI who makes a patchy living by taking on legally dubious and unpopular jobs. There were two Mike Crowe stories, each of which appeared in separate crime fiction anthologies – one edited by Stephen Knight, and another by Stuart Coupe and Julie Ogden. The latter, “Sandcrawlers”, was impactful enough to be re-printed in Rolling Stone as part of the publicity push for Case Re-Opened, the anthology in which it appeared, and much later, in Mark S. Deniz’s Dead Souls. I like Crowe and the mood he seemed to provoke, verging on Horror but never quite taking the final step into that genre quagmire. At some point I began work on a Mike Crowe novel that grew out of a short story I never sold. The novel, called Scavengers, mixes horror elements with crime noir – set in the Illawarra (you’d be surprised by its criminal history), and featuring a serial killer who steals apparently random body parts from his victims, as well as a grief-and-guilt tormented cultist, petty criminals, and the ambiguously present ghost of a young girl Crowe had failed to save some years in the past. I love the novel for its quirkiness, but have re-worked it many times trying to get the plot taut and the atmosphere just right. Originally it was written in the first-person, but recently I decided third-person would be better so have returned to it, in the process noticing some severe glitches in the characterisation of certain characters. Fixing one of these meant I had to re-construct the novel’s climax. Hopefully, Scavengers will be revised to my satisfaction, and completed, soon.

You recently released an acclaimed collection of ghost stories entitled Peripheral Visions. I’m curious, what is it about ghosts that you find particularly fascinating?

Ghosts are potent archetypes in human culture generally. They take different forms and go under different names, but they are ubiquitous and always carry the same set of meanings. Sceptics easily dismiss them in an age of scientific rationalisation, but stories of them never go away, and anecdotes purporting to tell of real, personal experiences are told even by folk who “should know better”. Why? For me it comes down the powerful way in which they are carriers of metaphors that whisper to us of our mortality, the dark influences of our past, our uncertainties, our fear of change and loss, our ingrained belief that living should be forever even as we recognise that everything, even the universe itself, will die. Death is forever creeping up behind us and those we love, whispering in our ear that we are doomed. In ghosts our hopes and our fears are given a form – and that form is not always pleasant. Even if they sometimes offer hope that death is not The End, they more often provoke Terror of what ghosts are and what their appearance means: inevitable mortality. So, to answer your question as to why they interest me so much, it is because they are powerful metaphorical icons and as a writer I can use their power to depict the complex darkness that lies behind Life and explore how we can cope with knowledge of it — or simply be lost to its horrors.

What story ideas would you like to explore over the coming years?

That’s a tough one. Story ideas that turn out to be good stories sometimes originate from ideas and experiences pondered over for years, but are just as often simmering embers had burn out long before they become anything. But in general my ongoing wrestling match with the idea of mortality is certainly not yet over. It never will be, as, each year, I get closer to my own inevitable end. But it also takes many forms that fascinate me. Of late, the development of genuine Artificial Intelligence and the role of technology in the evolution of human-kind – as well as the consequences for earthly life in general – is a theme that has many facets I would like explore. That would inevitably draw me into SF, of course, as would the related topic of the impact of human-induced climate change on human civilisation and the planet in general (not that I haven’t gone there sporadically already). Meanwhile I’ve been considering the feasibility of expanding a published short story of mine into a novel that would do what I like best about fiction – that is, create a complete metaphor that encapsulates a significant aspect of human life, in this case the ecological and psychological challenges that lie ahead. And yes, it does have a giant monster in it. In a somewhat lighter vein, I’ve been intending to expand on the Life and Experiences of Hugo Drakenswode, an explorer in cryptobiology and the bizarre, as told by his nephew, Doug Ormsham. The project would involve short stories, diary entries and newspaper articles held together by overarching events. The inspiration arose from a series of bogus emails I sent myself in 2005 or thereabouts, which I published on my website. If you’re interested in that one, you can read them here: http://roberthood.net/daikaiju-antho/drackenswode/index.htm#012005, and in this brief “side-blog”: http://searchingforcryptonbury.blogspot.com.au/

Lexicon by Max Barry springs immediately to mind – a taut, well-constructed and imaginative SF thriller, which is so cleverly conceived in its depiction of weaponised language I could not put it down. To be honest, though, my reading of recent work has slumped somewhat of late due to… well, life, the universe and everything. What I’m now looking forward to reading is, on the one hand, Kaaron Warron’s new lit-horror novel, The Grief Hole, which I have no doubt will be creepy, profound and unforgettable, and Angela Slatter’s well-received Vigil; and on the other hand, the next two volumes of Alan Baxter’s “pulp”-thriller Alex Caine series (having already read the first book, Bound, and thoroughly enjoying it). But there are so many terrific Australian authors that need to be read at the moment that offering any more of a list would bring on reader-choice paralysis….

Which author (living or dead) would you most like to sit next to on a long plane trip? Why?

William Blake, the 18th century British metaphysical poet and artist, for sure. Blake was the subject of my post-graduate thesis and he left his stamp on my life and my worldview, so much so that it might be fair to say that many of my stories (including my epic fantasy novel Fragments of a Broken Land: Valarl Undead) are hymns to his fervent imagination. I would like to ask him what he thinks of the modern technological world (which has taken the “dark satanic mills” of his industrial revolution visions to an extreme), with positives and negatives that might be enough to make him rise from his grave to continue work on his unfinished and now lost “Bible of Hell”. I would also like to show him some of the better superhero graphic novels around and ask him if they represented a medium he would have thrown himself into if it had existed back in his time. “After all, Bill,” I’d say, “these superhero tales of human gods and monsters are what you were unknowingly striving to create!” – just to get his reaction.