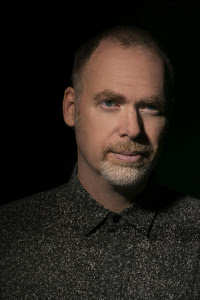 Scott Westerfeld is the author of eighteen novels (five are for adults, and the other thirteen for young adults), including the New York Times-bestselling Uglies and Leviathan series. Scott is one third of the writing trio of Zeroes, with the second book due out in Australia in September. Find Scott online at http://scottwesterfeld.com/

Everyone’s talking about the series Zeroes, that you’re co-writing with Deborah Biancotti and Margo Lanagan. The second book, Swarm, is due to come out September this year. One of the biggest talking points from your fans is trying to work out who’s responsible for which parts, or which characters. Can you give us any hints at all, or can you say a part that you wish you wrote? Or can you tell us about a scene that was cut that you really enjoy?

One of the great things about collaboration is that there are lots of scenes that I never would written myself, including scenes that feature my own characters. Having three writers pushes every aspect of the novel in strange ways. No clues there, but here’s what I can say: If I had written Zeroes alone, one or two characters would have been the star. But the balanced look into all six of them comes from the fact that every character has a full-time advocate.

Afterworlds was a novel that captured the hopes and dreams of many budding and emerging authors, showing us Darcy who gets a book deal, delays college and moves to New York to pursue her dreams – I certainly wanted to be there with her, eating cheap noodles! Is there any chance of bringing out the novel-within-a-novel that we see in this book (the one Darcy is writing), or a companion piece? (And what’s the go with the non-fiction How to Write YA we heard about?)

The novel-within-the-novel is pretty much complete within that book. (There are 75,000 words of it included!) The only sequel I’ve thought about doing is more of Darcy’s story. There’s a very committed group of people working on an Afterworlds movie, and I think it would be fun to write a novel in which Darcy’s book is being made into a movie, letting my experiences on set, etc., stand in for hers. (And yes, How to Write YA is still in the works. Not sure when it will come out, though.)

With Swarm out this year, and the third Zeroes book due out in 2017 you have a few things on your plate at the moment, but do you have any other projects in the works at the moment and what can you tell us about them?

I have a graphic novel called Spill Zone that comes out in May 2017. It’s about a young outlaw artist who rides her motorcycle into a walled-off alien invasion site to take photographs, which she sells to wealthy underground collectors. The hero also has a younger sister who survived the night of the invasion, who has a creepy talking doll that is kind of possessed by an alien intelligence. (Well, not really aliens, something much worse.) The pages will start to go online in October 2016 (check my website), and the series will have two books, both drawn by the amazing Alex Puvilland. 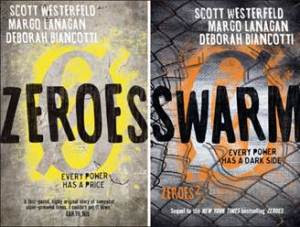 I’m sure everyone’s heard of Illuminae, which is the bomb. Lily Wilkinson’s The Boundless Sublime just came out. It’s a compelling account of a young, grief-stricken girl drawn into a cult, based on tons of research and real-world cases, which makes you realise: There’s nothing quiet as strange as real people.

I have sat next to Justine Larbalestier on many long plane trips, and to Garth Nix on one train trip, so I shall disqualify them. So I’ll go with Holly Black, whose plot-doctoring skills I have often sought out. Also we were by coincidence on a plane across the Atlantic together (with Cassie Clare), but were many rows apart, which seems like a missed opportunity.