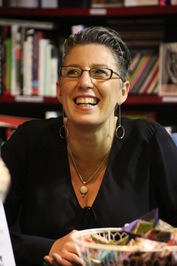 Nike Sulway lives and works in regional Queensland. She is the writer of the books Dying in the First Person, Rupetta, The Bone Flute, The True Green of Hope, and What The Sky Knows. In 2014, Rupetta became the first work by an Australian author to win the James Tiptree, Jr Award.
Your most recent novel is Dying in the First Person, which has been getting some rave reviews. There’s a lot going on in the book, but one aspect that you’ve written a little bit about on your blog is the idea of paracosms, or invented worlds. What drew you to the idea of including one in this novel? What do you think paracosms say about individuals or society?

I’m not sure I can put my finger on a single moment when I first encountered the idea of a paracosm, and wanted to write about it. Do other writers really have those singular moments when ideas flash into their thoughts as subjects? I’m not sure that’s every happened for me, instead it’s slow accretion, slow obsessions. Anyway, there are probably at least a few things. As a child, I had a really good friend, a ‘bosom buddy’ as Anne would have said, and we had a shared paracosm. It wasn’t quite like Nahum: it didn’t exist in some ‘other’, undiscovered place. It was the bushland that extended out from the back of her house. But in our relationship with it, that bushland was populated by storms of magical creatures. Fairies especially, but also a terrible, cruel Bunyip, and winged horses and trolls. When we left the house to go bushwalking, we entered that parallel world, as if through a magical portal. One of the interesting things about that process, to me now, is that when we entered the bushland, we also put on other versions of ourselves. We had different names and different bodies. And I remember, very distinctly, looking at my friend, Cavel, and seeing her as other self. Magical and strange. And wondering if she saw what I thought of as my true self, too.

When I came to writing this novel, I think there were several things that collided in my imagination. I’d been working at the LOTE centre (a now-defunct division of the Department of Education, dedicated to supporting the teaching of Languages Other Than English), so I’d spent some time immersed in a community of workers who all had a language other than English as their first language. And then I spent some time in the Netherlands, with my family. My Oma had dementia, and one of the effects of that, for her, was that she slipped in and out of the languages she spoke–particularly English and Dutch–weaving them together in a way that made sense to her, but was often difficult for those caring for her. There were times when her shifts made a kind of mnemonic sense: when she spoke about living in Australia, she would use English, and vice versa, but at other times there didn’t seem to be any rhyme or reason for the shifts. And she was very old, and very frail. I was conscious — we all were — that she was dying. So these ideas, of languages and how they relate to our sense of self and community and family, of alternative realities and shared, created worlds, and the loss of love. The way families can be physically separated, but deeply emotionally connected to each other, all came together in these two brothers, and Nahum, and the stories they wrote for each other.

I’m not sure I can say anything conclusive about what paracosms say about individuals or society for others. That’s much too big a question for me to answer. But I do see patterns in the research I’ve done around childhood paracosms, in particular. Oddly, they’re often connected to children who are conceived of as geniuses — as peculiarly talented or sensitive. They seem, most often, to be expressions of a utopian ideal, but one in which darkness nevertheless lurks. They might be kingdoms where children rule, or where children are not policed by parents and teachers, but there are monsters lurking at the edges of those worlds. War and death and loss.

I suspect that paracosms, like most created worlds in speculative fiction, are most often mirrors that their creators hold up to the real world. Distorted reflections that reveal things about ourselves and our worlds, and poke at them. Sometimes, they’re forms through which we can ask those ‘what if’ questions: what if the moon were made of cheese, what if women were equal citizens, what if gender was understood differently, what if race was understood differently. In Nahum, Samuel and Morgan create a world in which, unconsciously, they wonder what would happen if the only citizens of the world were men, and each of them lived alone.

You spend a good portion of your life talking about writing, and teaching others about it. Does this help or hinder your own writing? And I’m very curious – has the number of students taking such courses increased or decreased lately?

A little of both, actually. Sometimes it’s inspiring and challenging; sometimes it’s enervating and overwhelming. At times, just at a very banal and practical level, the teaching (and other aspects of my day job) mean I don’t have time to write, or the imaginative energy left after long days of meetings and administration, email and committee work. But the classroom, or workshop, and the conversations I have with my postgraduate students, those are most often rich, strange and challenging. I think they make me a better writer. Having to help others become better writers, helping them find the tools they need to express what they want to express, challenges me to do the same thing. To constantly question what I think good writing is, and how it can be achieved, and what it can do. It keeps me from becoming lazy or complacent.

I work in a regional university, and I’ve only been there a couple of years, after a long ‘absence’ from the university sector. At USQ we have a relatively new Creative Writing program, so it’s been growing steadily since I took up the role two years ago. That said, late last year I went to the annual AAWP (Australasian Association of Writing Programs) conference, in Melbourne. It’s a conference that I’d attended annually in my early years as an academic, from the second year it ran. And I was overwhelmed by the number of people there. It was HUGE. So I think, totally anecdotally, that there’s been an enormous increase in the number of students enrolling in undergraduate writing programs, but even more radical growth in postgraduate enrolments, particularly research Masters and PhDs.

Your novels to date are quite different from one another, and your short stories likewise. Do you have ideas or characters you’re hoping to explore in future stories?

I wonder if that’s confusing for readers. I have so many passions as a reader, and I think that that diversity in my reading passions is reflected in the styles and genres of stories that I end up writing. And perhaps my teaching influences me, too. Particularly in the undergraduate program, I’m concerned with offering students the opportunity to write across a range of styles and genres, and that means I’m constantly thinking about, reading, and discussing a wild array of works. This week, it’s been Nature Writing, Science Fiction, Ecological Criticism, Fairy Tales, Fantasy, Historical Fiction and the personal essay. You can probably expect works in ALL those genres from me at some point.

At the moment, I’m working on two novels (one of which might evolve into a kind of not-novel: we’ll see). One is the first of a trilogy of historical novels. It’s called The Orphan King, and is about Edward VI, the orphaned son of Henry VIII and Jane Seymour. The other two books in that series are about his two sisters, each of whom, like him, was the child of Henry VIII, both of whom became queens of England. The three orphaned monarchs are haunted by a trilogy of ghosts: their dead mothers: Jane Seymour, Katharine of Aragorn, and Anne Boleyn.

The other book, Tern, is a fairy tale. At least, what I think of as a fairy tale (to me, Rupetta was a fairy tale, too). It’s the story of a girl, Tern, whose several sisters are cast out of the family home after drought ruins their father and his new wife, pregnant with his first son, refuses to have them in her home. Tern sets out to find each of her sisters, but this is complicated by the fact that each of them has become something else. An animal, a piece of the landscape. So she’s walking around Australia—her and her dog—seeking women who aren’t women in an Australia that’s not quite, but is absolutely, the one you think you know. 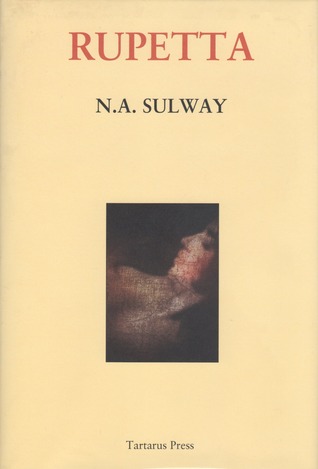 I have been reading a lot of essays lately: I read and absolutely adored Rebecca Giggs’s essay ‘Whale Fall’ (http://granta.com/whale-fall/). As far as books. My socks were blown off by Quinn Eades’s ‘All The Beginnings’, Josephine Rowe’s ‘A Faithful, Loving Animal’ and by Libby Connors amazing feat of historical work ‘Warrior: A Legendary Leader’s Dramatic Life and Violent Death on the Colonial Frontier’, which tells the story of the Indigenous warrior and lawman of the Dalla people, Dundalli. The book is more than just an account of one man’s life. It’s an account of his people, and of the culture that white ‘settlers’ tried so hard to wipe out.

A dead one, so that I can use their seat and my own—really stretch out while they hover without a body in the aisle–and not arrive, at the other end of my international plan trip, feeling like Death.

More seriously? Recently, I listened to David Sedaris reading and discussing Miranda July’s short story ‘Roy Spivey’. This is a story that begins: “Twice I have sat next to a famous man on an airplane.” One of the men the narrator sits beside is “a Hollywood heartthrob who is married to a starlet”. It’s an astonishingly good, heartbreaking, funny, surprising story. July is never disappointing on any of those grounds. And really, I want to sit next to her so I’ll appear, with a name that is ‘almost an anagram’ of my real name, in a future story, poem, film, or artwork by Miranda July.

Miranda July would have had a better answer for this question.
Advertisement