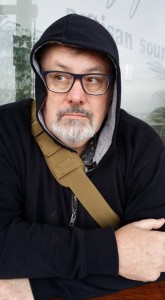 After decades of fanzine production in 1995 he won the Best Fan Writer Ditmar Award at Thylacon in Tasmania. In 2012 his Paleo-Cinema Podcast was positively reviewed by The Onion AV Club. He can be heard every second Thursday at 9PM AEST on ABC Local Radio Northern Territory.

Can you tell me about a recent podcast on the Martian Drive-In, discussing personal attacks around Star Trek and Ghostbusters?

I’m really interested in the way things like popular culture, cultural differences, male entitlement and the evolution of our own culture clash online. This is a new phenomenon where damaged people can attack people with whom they disagree in novel, but brutal, ways.

Star Trek Beyond was criticised for the Gay Sulu thing, both for going too far and for not going far enough. Even George Takei disagreed with it, but in a very reasoned and stylish way. That’s a lesser example.

The whole female Ghostbusters are raping my childhood bullshit is a much larger and uglier conflict. It tells us enormous amounts about the people who made this kind of bombastic and insensitive comment. Insensitive and insecure dickheads are something I understand, having been one for way too many decades.

But the Ghostbros fanned the flames of the culture wars, which lead to the sexist and racist attacks on Leslie Jones on Twitter.

So there is this enormous and damaging ideological conflict going on and some of the most visible battlefields are tentpole summer movies, which is, in the wider world of terrorism, social upheaval, economic uncertainty and climate change, an utterly crazy thing.

I went on a long ranty analysis on this in the most recent Martian Drive-In Podcast. Having a predominately one-person podcast gives me that indulgence. Part of the reason I did, is because the most strident evangelists for a cause are those who converted recently. People such as myself.

How did you start out as a podcaster? If you could record proto-you a cassette and post it back in time, are there any tips you would give him?

I heard about podcasting and started ten years ago, in 2006. I was an old-school fanzine fan but blogs and the interwebs made that method of self-expression a bit silly. I blogged for a while, then I heard about podcasting. With a $12 Dick Smith microphone, my wife Sally and I did thirteen episodes of a chatty, what we’ve been doing podcast called Chew Like Buggery, which people can find on archive.org.

After Sal got sick of me talking over her all the time when we recorded and quit Chew Like Buggery, I still wanted to podcast so I looked for a format.

I started Paleo-Cinema Podcast – talking about old movies – mostly because the then existing podcasts were all talking about recent films and doing it pretty poorly. I was into old movies, so I started a format of talking about films more than 20 years old. Paleo-Cinema is still going strong but when I hit 100 episodes of that, I decided to do a second podcast, Martian Drive-In Podcast so I could talk about genre films of any vintage.

PCP is coming up toward 200 episodes now and MDIP 100, and I still love doing both of them.

What do you plan to work on next?

I have a regular fortnightly gig talking about movies on ABC Local Radio Northern Territory, which I love. The footprint of ABC NT is 1.4 million square kilometres by radio, and global streaming increases that to the whole planet, which still blows my mind.

I’ve been doing it for six years with a number of presenters and it’s a great way of honing my skills and of sharing a passion for cinema. There’s no point in learning or knowing things if you can’t share it.

I also want to get more guests for the podcasts, something I’m already working on. I’m lousy at organisation but to get the shows to where I want them, I need to get my act together and collaborate more.

I loved the TV series Cleverman and an Australian indigenous movie called Goldstone, written and directed by Ivan Sen, which is one of the best westerns I’ve seen in years.

I also love other fannish podcasters, Galactic Suburbia, The Writer and The Critic and the Coode Street Podcast. We’re all doing our own thing in our own ways and that’s very exciting for all of us.

John D. MacDonald, my favourite crime writer. He wrote about ecology, the perils of late-stage capitalism and threats to privacy before anyone else. He died in 1985 so he was a man of his time, but I’d love to show him the World as it is now. He’d be awed, delighted and horrified, just like the rest of us.