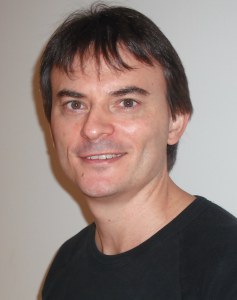 Being able to escape into the realm of the imagination was handy growing up as the youngest in a family of eleven. Chris continues his fantasy and SF writing habit from his home town of Brisbane, where he lives with his lovely wife Sandra and three children, Aedan, Declan and Brigit. He has a third-dan black belt in Moon Lee Tae Kwon Do and also enjoys movies and exploring narrow alleyways. Chris is very passionate about music, if a little inconsistent, and loves singing and playing classical guitar. His is the author of the three-book heroic fantasy series, The Jakirian Cycle, and will launch his new SF novel The Tau Ceti Diversion on September 1st 2016.

You have just teamed up with Severed Press to release your novel, The Tau Ceti Diversion. Congratulations. Can you tell us a bit about the new work and what inspired you to write it?

The Tau Ceti Diversion was driven by two main things. My idea for my central character Karic, who I had planned as the lead in a continuing series of stand-alone SF books, and by the mystery at the core of the book, which concerns the aliens he encounters. I can’t say anything about the second idea without spoilers, I guess you’ll have to buy the book and find out!

In the book, the first interstellar exploration vessel Starburst sets out from Earth in 2157, but this is no NASA science mission, it’s funded by the mega-corporation ExploreCorp. A planet suitable for colonisation means not only massive profits, but a chance for Commander Janzen to restore his family’s exulted position. But is the executive turned space-explorer, Janzen,  equipped to deal with a real crisis?

On approach to the planet Cru, the Starburst is hit with a surge of deadly radiation that kills most of the crew and disables the ship – this is where the story starts. It’s a fight for survival as sub-Commander Karic struggles to get control of the fusion drive before the ship turns into a giant hydrogen bomb.

Karic rises to the challenge as he takes command and leads the survivors to the planet Cru. The thirst for exploration and the quest for alien first contact soon go head-to-head with corporate greed and the need for profit at any cost, as Janzen and Karic clash.

As if surviving on an alien planet wasn’t hard enough, they soon discover that Cru is already occupied . . . and its once vast civilisation is on the threshold of a momentous changeJ

You’ve blogged about the physical principles operating within and between different types of celestial body and how these principles can be applied to fictional planetary worlds. What is it about the many worlds of deep space that appeals to you as writer? With space fiction, how important is imagination versus accuracy? Do you find yourself having to do increasing amounts of research to remain current as discoveries made by probes like Curiosity and Juno roll in?

I think what draws me to SF is that thrill of discovery – the idea that humanity can go beyond the boundaries that constrain us and grow as a society and as individuals on that journey. I also enjoy all the fun of the action and mystery along the way. For SF particularly, I think it’s the thrill of coming across a brand new concept – some scientific principle that just might come into reality and change us forever.

I get very frustrated by SF that simply recycles ideas from the genre, and outraged by SF writers who get things just plain wrong. I am much more excited about near-future SF that takes what we have now and shows how we can actually move from where we are to that next frontier, which I why I loved movies like Gravity and The Martian.

To answer your question, I think that good SF is a blend of both outstanding imagination – exploring new boundaries of the possible – and solid science. I think that the traditional boundaries that separated SF from other speculative fiction have largely been lost.

I have had to do a lot of research for my SF. The first draft of Tau Ceti Diversion was written in 1995. It has been rewritten more times than I can count over the years as I bounced between TCD and my latest works-in-progress. And many of those rewrites have been major exercises as the new science came rolling in. When I first wrote TCD there was not a single planet identified outside our solar system. Now there are more than 3000 confirmed exoplanets! Included in those are most of the planets in the Tau Ceti system, where my story is based. So I had to do a lot of work for this latest draft to make sure that the world that my explorers found could resemble the one I imagined, and that the current discoveries and understanding of space travel matched my story.

I’m just so glad I can finally get the story out there!

What’s next for you now that The Tau Ceti Diversion is completed? Are you planning to continue exploring the cosmos or do you have other story worlds in mind?

At the moment I am working on an urban fantasy/fantasy series called Demon Leash. It’s told in three different worlds, with many characters and character arcs, and I really hope I can pull it off.

I have done a ton of research for Demon Leash, including reading all the way through Dante’s Inferno, Purgatorio and Paradiso, and wow that was dense material.

The story has one main character in Brisbane, who has been in psychiatric care for almost thirty years. At the onset of the story he is trying to win his way free of both the institution and the drugs, and wondering if he is truly insane, or if his memories of being a spirit warrior in the Otherworld are real. His journey is about discovering the truth, dealing with the loss of his wasted years, and reclaiming his life.

The second main story arc is told in the fantasy world of Ess, where a cursed prince, who has been possessed by seven demons, struggles back from a world of madness to try to win free from slavery, restore his Magi powers, and save his empire from the rise of a dark priesthood.

And between this is the Otherworld, the lucent worlds of the Tree and the demon-haunted depths of the Void, where both characters join to fight the demons that enslave them and win redemption.

It’s hard to try and convey such a complex story in a few paragraphs. There are many levels, and themes. I think I am probably insane to think I can massage a workable story from such a complex tapestry, but I’m just going where the story is leading me.

What books have you been reading lately?

Lately I have been completely obsessed with the Bernard Cornwell Saxon novels, which feature his central character Uhtred. Cornwell has always done thorough research, but in these books – all written in the first person – I have found myself so immersed in Uhtred’s character, his strengths and his flaws, and the gritty, textured world of ancient Britain, that I find them irresistible.

Typically I read either hard SF or heroic fantasy, but I also love historical fiction. The CS Forester Hornblower series was probably the first one I obsessed over as a young reader, eager to get to the library and check out the next one in the series. Probably around the same time I was reading Isaac Asimov’s Foundation series, and Arthur C Clarke.

People had been telling for years to read Bernard Cornwell, and I did try to read him years ago. Unfortunately I started with this Arthur series. Although it’s also told in the first person, I found the first book in that series so much less absorbing than I would later find the Uhtred tales. It was not the lack of detail, or research, I just did not find the central character – who was removed from the core action – compelling enough to hook me. And I felt that the story was quite distanced from me as a reader.

I’ve also been reading the Rober Fabbri Vespasian series, and that is brutal. After reading David Gemmell, whose heroes always question their use of violence, reading about characters who see ruthlessness is a virtue is hard to take. He lacks polish and the craft of masters like Cornwell, but I am enjoying Fabbri’s portrayal of the ancient world.

That’s a real no-brainer. It would be my all-time favourite writer David Gemmell – a British Heroic Fantasy author that unfortunately died way too young in 2006. I love Gemmell’s books, and continue to return to them again and again. Last year I re-read them all in order of publication, then read my birthday present – the virtually-impossible-to-find White Knight Black Swan the crime novel he published under the name of Ross Harding. I used to make a game of looking for that book in second hand stores – kind of like looking for the mythical white stag in the forest – but finally despaired of ever coming across a copy. So I decided to buy the book from a rare book dealer. It was a ratty little paperback with pen marks on the inside, but I savoured it, and reading that book was a personal ambition achieved.

And what would I talk to David about? His writing, his life, and particularly the themes that drove his fiction and that he would return to again and again: the ultimate morality of using violence for good, and whether anyone can find redemption, no matter what they had done.