Alisa Krasnostein is editor and publisher at independent Twelfth Planet Press, a PhD student and retired environmental engineer. She is part of the Hugo winning Galactic Suburbia Podcast team. In 2011, she won a World Fantasy Award for her work at Twelfth Planet Press. She was the Executive Editor and founder of the review website Aussie Specfic in Focus! from 2004 to 2012. She is a full time Mum, critic, reader, reviewer, podcaster, environmentalist, knitter, quilter and puppy lover.

One of our most recent publications is Winter’s Tale. Written by Nike Sulway and illustrated by Shauna O’Meara, Winter’s Tale is the first title for our new children’s imprint Titania. It’s a whimsical story about Winter, abandoned as a baby, finding where they belong, and family and friends who love them for who they are. It’s exquisitely illustrated in vibrant colour and a gorgeous story.

I’ve also been on a bit of a novella publishing bent lately. Icefall by Stephanie Gunn is everything you could want in life if your interests are women athletes, mountaineering, lesbians in space and weird unexplained phenomena. With some loveable AIs thrown in. Gunn does a really wonderful job in Icefall and I’m very proud of her on this one. Additionally, I decided, with my own recent enjoyment of the (truly terrible) Hallmark Christmas movies, that I wanted to regularly publish fun, snuggly feel good holiday novellas at the end of each year. (I skipped last year because … life but I hope to get back on track.) The first two in this series both happen to be set in Tasmania – Merry Happy Valkyrie by Tansy Rayner Roberts and Marry Me Mischa McPhee by Kate Gordon. Merry Happy Valkyrie combines Norse mythology and magic to uh, explain in the hilarious way that only Tansy can why it would be snowing in Tasmania at Christmas, with dragons, and romance. Whilst Marry Me Mischa McPhee is not specfic, it’s very on brand for a TPP story. Mischa McPhee works in a bookstore and in the lead up to Christmas, someone starts leaving love notes for her on the toilet cubicle wall at work. This is a sweet lovestory both in the romantic and the platonic sense of the word.

There was this moment in the dealers room at Worldcon in London in 2014. At the convention, we were launching our first YA title called Kaleidoscope which I coedited with Julia Rios. The aim of this anthology was to create a diverse array of stories, by a diverse set of authors, in order for as many teens and YA readers as possible to see themselves within the covers. And more than that, our aim was to publish a set of hopeful, positive stories where minority voices were the heroes and protagonists – to say that it doesn’t matter who you are, you get to have adventures, do cool things, fall in love, or be the hero (and not die at the end for some other character’s personal growth). Anyway, the authors in this collection are amazing and embraced promoting the book wherever they were. John Chu did a panel where he talked about the book and then he sent some teens up to the dealers room to buy a copy. So we’re standing there at our stall, it’s mid-morning and a lull in customer traffic as panel programming is on. Suddenly these teens rush up, very excited having spotted our big display of Kaleidoscope, and they each take a copy. One of them gives it a hug and then asks if we have any other books like it. I grab up one of the last copies of Nightsiders (by Alex Isle) – another short story collection featuring a transgender teen as well as some other genderqueer characters – and offer it up. Well! The raptured sigh this kid gave me and then paid and rushed off with two books made for them, and hugging them to their chest, that sigh has propelled me through the roughest of editing and publishing days. That sigh was the entire reason I became an indie publisher. And it was also what propelled me to publish the Years Best YA volumes so there would be more fiction for that kid to read. Hands down, best publishing experience to date.

Life’s meant that things have been quiet at the publishing end of the process for Twelfth Planet Press but we have been very busy behind the scenes working on many upcoming releases. Some of those include:

– Girl Reporter by Tansy Rayner Roberts. We will be reprinting this novella in Tansy’s Cookie Cutter Superhero universe. 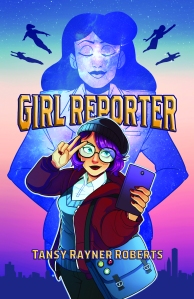 – The Long Shot by Deborah Sheldon will be the next title from our crime imprint Deadlines. It’s moody and dark and fabulous.

– Rebuilding Tomorrow an anthology exploring society beyond the apocalypse. Edited by Tsana Dolichva, it includes sequels to some favourite stories from Defying Doomsday.

– The Motherland Garden by Grace Dugan is a fantasy novel exploring love and identity in a world of colonial bureaucracy and guerrilla warfare.