Shirley Jackson award-winner Kaaron Warren published her first short story in 1993 and has had fiction in print every year since. She was recently given the Peter McNamara Lifetime Achievement Award and was Guest of Honour at World Fantasy 2018, Stokercon 2019 and Geysercon 2019. Kaaron was a Fellow at the Museum for Australian Democracy, where she researched prime ministers, artists and serial killers. She’s judged the World Fantasy Awards and the Shirley Jackson Awards.

She has published five multi-award winning novels (Slights, Walking the Tree, Mistification, The Grief Hole and Tide of Stone) and seven short story collections, including the multi-award winning Through Splintered Walls. She has won the ACT Writers and Publishers Award four times and twice been awarded the Canberra Critics Circle Award for Fiction. Her most recent novella is Into Bones Like Oil (Meerkat Press), shortlisted for a Shirley Jackson Award.

My most recent book is a novella, Into Bones Like Oil, from Meerkat Press. It’s doing pretty well so far! Shortlisted for the Aurealis, the Stoker and the Shirley Jackson. The audio book is amazing; I love hearing the character voices spoken aloud, and the audio actor, Katherine Littrell, is incredibly talented. 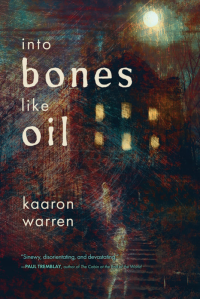 I’ve got a story coming up via the “Does the Dog Die in this?” podcast, where Glenn Parker publishes a new story and interviews the author. “The Smell of Waiting” was a 50 word story for a long time; this short story figures out what really happens when someone has the ability to breathe in death.

I’ve also got a story coming up in Gods and Globes 2 edited by Lancelot Schaubert. The stories all bring together gods and planets; I chose Athena for mine.

It’s very, very hard to choose one moment of many and varied experiences. I think the last year, where I was Guest of Honour at the World Fantasy Convention, Stokercon and New Zealand’s Natcon was pretty incredible. I’m really proud to have made it to a point where I’m invited to receive such an honour, and I hope I deserve it!

I’m happy with how Into Bones Like Oil is being received. That story was a long time coming, something I’ve been thinking about for probably 30 years, which seems incredible! Lots of snippets gathered, lots of thoughts, lots of characters. So it’s great to see that readers are engaging with it.

This is going to sound really soppy, but being a part of our community is something that is right up there, too. We’re a bunch of smart, funny, caring people and I’m glad we have a voice on the world stage.

Tim Napper’s first short story collection Neon Leviathan from Grimdark is justly getting some great reviews. Tim is one of the smartest people I know, and he knows how to express thought in story.

Joseph Ashley-Smith’s “The Attic Tragedy”, a novelette from Meerkat Press, is so good. Joseph writes horror that is beautiful and filled with love but at the same time utterly chilling.

P.S. Cottier has a new book of dark poetry out. I wrote the intro to this, so I’m a bit biased, but this is a poet of such great humour and such a fine touch with the creepy and nasty, I’ll read anything she writes. It’s called Monstrous, from Interactive Press