Terry Dowling is one of Australia’s most respected and internationally acclaimed writers of science fiction, dark fantasy and horror, and author of the multi-award-winning Tom Rynosseros saga. He has been called “Australia’s finest writer of horror” by Locus magazine, its “premier writer of dark fantasy” by All Hallows and its “most acclaimed writer of the dark fantastic” by Cemetery Dance magazine. The Year’s Best Fantasy and Horror series featured more horror stories by Terry in its 21-year run than by any other writer.

Dowling’s horror collections are Basic Black: Tales of Appropriate Fear (International Horror Guild Award winner for Best Collection 2007), Aurealis Award-winning An Intimate Knowledge of the Night, the World Fantasy Award nominated Blackwater Days and The Night Shop: Tales for the Lonely Hours. Other publications include his debut novel, Clowns at Midnight, which London’s Guardian called “an exceptional work that bears comparison to John Fowles’s The Magus”, and The Complete Rynosseros in three volumes. His homepage can be found at www.terrydowling.com

Following the publication of The Night Shop: Tales for the Lonely Hours by Cemetery Dance in the US in 2017, the most significant publishing event – and something of a career high for me – is having The Complete Rynosseros: The Adventures of Tom Rynosseros appear about now as a deluxe, slipcased, three-volume hard-cover set by PS Publishing in the UK. This not only brings together all 45 Tom Rynosseros stories (including a brand-new one, “Calling Down the Sun”), but features striking new cover art by Nick Stathopoulos and a memoir volume about the writing of the stories. The slipcased set is a hefty UK £150, but there are paperback editions available as well from the PS Publishing website. 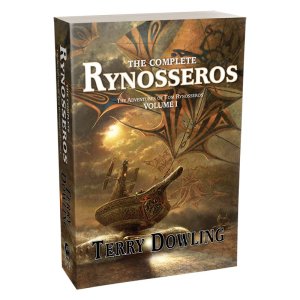 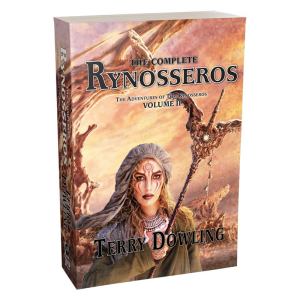 The Complete Rynosseros aside, it would have to be a major retrospective on my dark fantasy and horror storytelling by American scholar Boyd White from Johns Hopkins in the US. “Terry Dowling: Poet of Shadows” appeared as the lead article in Firsts magazine, September/October 2019. In White’s view, my dark fantasy represents “a singularly distinct body of work that is one of the most remarkable achievements in contemporary fantastic fiction”, and he believes that three stories in particular, “Mariners’ Round,” “Nightside Eye,” and “Two Steps Along the Road,” distinguish The Night Shop as “a cornerstone collection of supernatural fiction, a book that belongs on the shelf alongside Vernon Lee’s Hauntings (1890), Robert W. Chambers’ The King in Yellow (1895), Arthur Machen’s The House of Souls (1906), and Edith Wharton’s Ghosts (1937).” That sort of careful, considered recognition means a lot, as you can appreciate.

Also, there’s the forthcoming double issue of Van Ikin’s long-running magazine, Science Fiction: A Review of Speculative Literature (Editions 51 & 52) (http://www.sciencefiction.net.au/), that’s due out soon. It’s devoted to my earliest work, and features a long interview (with photographs) and my very first stories in print, including a never-before published original from the 70s. I’m really looking forward to it.

I’d add to this Ellen Datlow’s continuing support of my career. As well as taking my story “The Unwrapping” for Echoes: The Saga Anthology of Ghost Stories (a tale regarded as “a delightful ‘what if?'” by Locus magazine), Ellen provided a wonderful jacket quote for The Night Shop in 2017.

Alas, as someone who’s a 24/7 carer for a 96 year old mother, I haven’t been in any kind of position to keep up with the local scene. If I’m not busy with caring duties or my own writing deadlines, I tend to re-read those pre-1990 writers who had such a tremendous impact on the field, back when it was so much easier to be new, fresh and different. I intend to do a catch up as soon as I can.