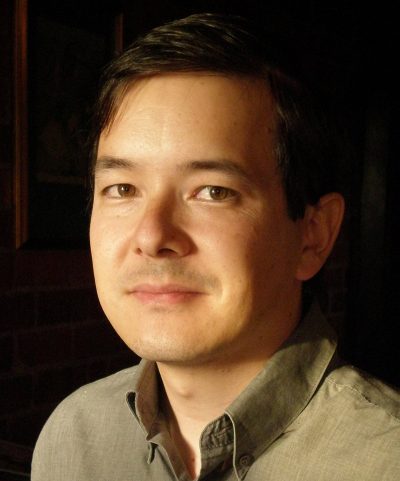 Shaun Tan grew up in the northern suburbs of Perth, Western Australia. In school he became known as the ‘good drawer’ which partly compensated for always being the shortest kid in every class. He graduated from the University of WA in 1995 with joint honours in Fine Arts and English Literature, and currently works as an artist and author in Melbourne.

Shaun began drawing and painting images for science fiction and horror stories in small-press magazines as a teenager, and has since become best known for illustrated books that deal with social and historical subjects through dream-like imagery. The Rabbits, The Red Tree, Tales from Outer Suburbia, Rules of Summer and the acclaimed wordless novel The Arrival have been widely translated and enjoyed by readers of all ages. Shaun has also worked as a theatre designer, a concept artist for animated films including Pixar’s WALL-E, and directed the Academy Award-winning short film The Lost Thing. In 2011 he received the prestigious Astrid Lindgren Memorial Award, honouring his contribution to international children’s literature.

My most recent book is Tales from The Inner City, which is a collection of surrealist, illustrated stories about wild animals in urban environments. I’ve been working on it for a number of years, just thinking about the way in which our human society finds itself increasingly abstracted from nature, from much first-hand understanding of other animals, and also the long history of animal fables across every culture.

Well probably that book, it was actually surprisingly painless to write, illustrate and get published. Maybe I’m getting better at this game! Although as far as publishing highlights go, I think it’s hard to beat the thrill of seeing my first illustration published when I was 16, a drawing of a robot kangaroo used as the cover for Aurealis magazine, issue 2, maybe around 1990. Not a wide circulation, an very limited three-colour printing, but it really felt like crossing over to another side of the equation, no longer just a reader, but an actual contributor. I’ve had a lot of good and fortunate experiences since then, but that was a key moment.

I haven’t had a great deal of reading time lately, mainly on account of small kids and a backlog of work, but from an illustrational point of view I’d recommend Campbell Whyte’s Hometime, a comic about some Perth school kids who accidentally cross over into a rich fantasy world. It pays homage to a lot of local detail while also broadening out into plenty of imaginative complexity. Another very interesting and very Oz comic about a post-collapse Australia is Pat Grant’s The Grot. These are works that might not be marketed as Antipodean spec fit but are certainly that, written and drawn with humour, weirdness and a bucketload of patience.