Thalia Kalkipsakis is the author of twenty books for children and young adults. In May 2016 she released the second instalment of the Lifespan of Starlight trilogy, which follows a group of teenagers who discover the secret to time travel. She lives in north-east Victoria with her husband, their two children and two black cats.

The Lifespan of Starlight series is the first novel-length science fiction that you’ve written. After writing children’s books and contemporary YA, what was it like switching into science fiction mode?

It felt hugely freeing and slightly terrifying – like driving on my own for the first time, with the full awareness that I might crash. The first story I ever pitched, eons ago, had hyper-natural elements (in that, I’d started with the natural world and extrapolated into supernatural from there). It was rejected, but that led to the opportunity to write contemporary children’s books. So, right from the start I was working outside my chosen genre. In hindsight it was the best thing that could happen to me because I was forced to develop character and pacing to get the story working, rather than pull out any writerly ‘sonic screwdrivers’ so to speak.

Some of the contemporary stories I pitched during that stage were rejected as being too plot driven – so the urge never left me – but I’m definitely better at drawing characters now than if I hadn’t had the time writing contemporary fiction. Even while writing Lifespan of Starlight the plot twists and action scenes almost felt too much fun, like I was cheating in some way. Although, of course, what’s the point of twists and turns if you don’t care about the characters living through them. 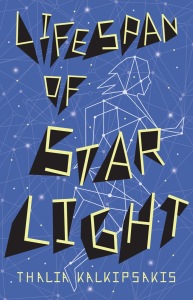 Having written books for a few different age ranges, do you have a favourite? Are there any age groups you haven’t tried that you would like to have a go at?

Coming-of-age stories are endlessly fascinating for me – that moment when a young person is given the freedom to make their own way, to determine who they are, or perhaps who they would like to become. That said, however, I don’t see YA as a genre simply for teenagers. Adults who read YA are making a conscious decision to do so, whereas the same distinction doesn’t seem to exist in cinema – think Star Wars and Back to the Future. Adult cinema-goers don’t think, ‘I won’t see Back the Future because Marty McFly is a teenager.’

In terms of age range, I’m more likely to start with the story concept and then write it in the genre that best suits the idea – so it depends where my ideas take me.

Are you working on any other speculative fiction books, besides the concluding volume in the Lifespan of Starlight Trilogy? Either way, what can readers expect to see from you next?

My husband teases me because I’m constantly saying that I’m going to take a break from writing after I’ve finished the current project – and then after a few weeks without writing I’ll begin tinkering with something new. At the moment I can’t see past the end of the Lifespan of Starlight Trilogy, but I do have an idea bubbling at the back of my mind. It has elements of The Mosquito Coast but set on a space ship or somewhere equally claustrophobic. 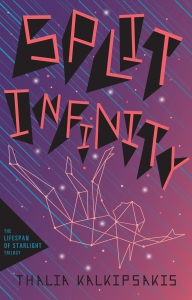 I admit, it wasn’t ‘love at first chapter’ but Clade by James Bradley really came to life for me as the story progressed. It follows a family over three generations, with climate breakdown as a backdrop – it’s raw and achingly real with an authentic sense of hope.

George Orwell, without a doubt. I wouldn’t be rude enough to quiz him on all this if it we were on a plane for real, but I’d love to hear his take on the contemporary world: populist democracy, class structure in the technological age, capitalist marketing machines and the state of the media … Our accelerating world needs another George Orwell.