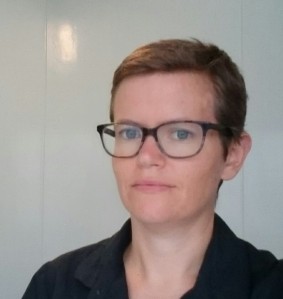 Grace Dugan is the author of The Silver Road and has published short stories in Interzone and Strange Horizons. She works as a medical doctor currently in Papua New Guinea.

You have just signed up with Twelfth Planet Press in Western Australia to release your second novel, The Motherland Garden. It will be coming out in 2017. Can you tell us a bit about what we can expect from the new work and what inspired you to write it?

It’s a secondary world fantasy with some bits and pieces of technology — radio, combustion engines, trains. The story is set in a subject nation of a larger, more industrialised empire, and the main character is Kirhep, a young woman who has grown up in a hermitage of women who study a type of weather magic. None of them have achieved any powers to speak of but they’ve dedicated their lives to keeping their knowledge alive, and Kirhep is one of the few who show a particular aptitude for it. She’s expecting to live a pretty quiet life secluded in this hermitage but then other things get in the way–love, heartbreak, guerilla war, sex, bereavement, betrayal, and weather.

I wrote the first draft of this book over ten years ago, so it’s hard to remember what I originally set out to do. I’m currently revising it and enjoying thinking about what each part of the book is about and how it (hopefully) fits into a coherent whole.

As well as being a gifted writer, you are also a medical doctor who has worked in tuberculosis clinics in Papua New Guinea and who will soon be embarking on a new Rwandan adventure to work and study for your masters in global health delivery. Have you found your line of work and the patients you have met bleeding over into your writing and have they affected the kinds of stories you want to tell?

I’m not sure about ‘gifted,’ but thank you. Certainly, medical work gives you a particular vantage point on the world with access both to individual people’s stories and a view of the society through the prism of illness. Both of these are fascinating.

What I’ve learned through working in different places has definitely enriched my worldbuilding. A couple of years ago I did a course which involved spending two weeks in Bangladesh and one day when I was walking through this regional city called Mymensingh I felt strangely as if I were walking through a particular city in The Motherland Garden, like I had stepped into my own book.

In Papua New Guinea I’ve been working in a very impoverished area looking after people with drug-resistant tuberculosis. Even before having TB, the things these people have to endure are mind-boggling. I’ve met people who live on the Fly River and had to move their whole village to higher ground after it was inundated due to pollution from the Ok Tedi mine. I’ve got a patient who lives in a two room house with 26 other people. Food security is so bad here that it’s very common for my female patients to weigh under 40kg and my male patients under 50kg, even after they’ve recovered from the weight loss associated with TB.

And of course if you think about it for more than a few minutes you realise that a significant proportion of people in the world live in this kind of grinding poverty. It’s a lot to think about and try to understand and I have no doubt some of this will surface in my fiction at some point, although I’m not sure how.

(On a slight tangent, I have a theory that if you look at any dystopian story, you could find a situation of similar awfulness somewhere in the world right now.)

On the flipside of this question, my background as a reader and writer of fantasy and science fiction gives me the imaginative tools with which I understand the world I’ve encountered through medicine. One of the pleasures in genre fiction for me is those thought experiments where you say, if the society is structured like this, how does it feel to live in it? That’s so useful when you’re imagining how things could be different than they currently are, or if you’re trying to imagine what it’s like to have a life which is radically different from your own.

I’d also love to write about TB at some stage. It’s completely fascinating. I read an article recently suggesting that Mycobacterium tuberculosis might have made the leap from being a soil microbe to becoming a human infection as a result of the invention of fire. People gathering in close quarters around a fire, and the smoke damaging people’s lungs and causing them to cough, might have created the environment that allowed it to become a pathogen. I also read a study where they isolated TB genetic material from a 9000-year old skeleton in Israel. Wow! So it’s been with us for so long, and in fact has killed more people than any other infectious disease over the course of history. It’s a shame if the only representation of it in literature is cliches about romantic poets.

With so many life paths vying for your time and passion, what is the dream future for Grace Dugan? Where would you like to be five years from now?

Five years is a long time for me. As you’ve mentioned, I’m moving to Rwanda to work and to study. My job is in a cancer program of a large US NGO called Partners In Health.. The aim of the program is to bring cancer treatment to impoverished rural people who otherwise would have no treatment. It’s a very bold and ambitious goal so it will be exciting to be a part of that for the next couple of years. After that, no idea.

It’s only in the past year that I’ve been able to get back into writing. Before, I just couldn’t figure out how to do it given that I never had any blocks of time free and work was really exhausting. Then I read this great book How Writers Journey to Comfort and Fluency by Robert Boice. He’s an academic psychologist who approaches the question of productivity in writing as if there is an answer to it. The material in the book is developed from a program he ran over several years helping people with writers block and similar problems, and it’s full of suggestions as to how to work in a way which is most pleasant, creative and productive. It’s really helped me a lot. Now I just write for a brief period every day, as little as fifteen minutes. I make slow progress but I accept that that’s my pace and I really enjoy it.

I loved Trent Jamieson’s Day Boy. So amazing and so devastating.

This question made me think nostalgically of the road trip I went on with Kelly Link from Massachusetts to Florida and back in 2005. It was a great time. Kelly tells anecdotes a bit like the way she writes, and sometimes when I read one of her stories, I think, didn’t Kelly tell me about that house she went to with the shrieking peacocks? Where was that? (She also did all the driving).

My first thought was to say Kim Stanley Robinson as I am a massive fan of his work and he seems like a really nice guy, but then I thought, maybe I’d like to sit next to Noam Chomsky. He has a really nice voice and I’d be happy to listen to him talk about almost anything. He’s so old it would be like talking to a time machine. Mr Chomsky, how were things at the end of the Second World War