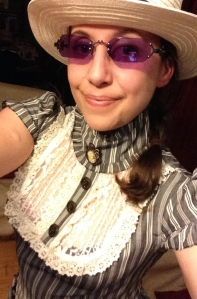 Amanda Kool lives at the foothills of the Dandenong Ranges, a glorious part of the world surrounded by valleys, forests, walking paths and, most importantly, wineries.

The writing magic happens in a little nook at the bottom of the house, closed off by a deep red curtain (her very own Black Lodge). In the summer, this is the only room in the house that is not in danger of combusting due to the sheer ambient heat.

Surrounded by the paraphernalia of whatever book she is writing (various tchotchkes, gewgaws, spirits, liqueurs, books, food stuffs and weaponry), she sits at her desk with a pot of freshly brewed tea and…Let’s face it; procrastinates, avoids, trembles, and swears.

This year saw the release of your debut novel—Tallwood. Congratulations! Can you tell us a bit about the genesis of this novel, and what we can expect?

I’ve written three solo novels so far (not including the two in my drawer that will never see the light of day). They do say that everyone has a novel in a drawer and I think my first two will stay right there – or maybe end up on a fire someday.

I digress. My books, in order; The Murderer’s Cloth, Tallwood, and Wires. Tallwood is the largest and most epic and it makes sense it would be published first (by Satalyte Publishing). It is the story about the world as it stands after a catastrophe almost 170 prior.

I love reading Apocalyptic and Post-Apocalyptic fiction, but typically, the novels are set during the disaster or very soon after. I wanted to write about people who had been born into a god-blasted world and have it be normal for them, not something to rail against. Survival is already in their DNA. They don’t have to learn to keep quiet or learn how to stay hidden. They just know.

It’s an exodus story, really. Below humans are safe; on the surface, they run the risk of being killed by a “clean-up crew” left behind. When an underground city becomes too large, it must split and send half its population out to a new place. The book follows several characters on separate journeys, whose paths intersect. When two very different strangers, each with their own secret, come to the city doors, a chance to save a population arises.

It’s a slow burn, but ramps up to a pretty climactic conclusion, with a little gore and retribution along the way. 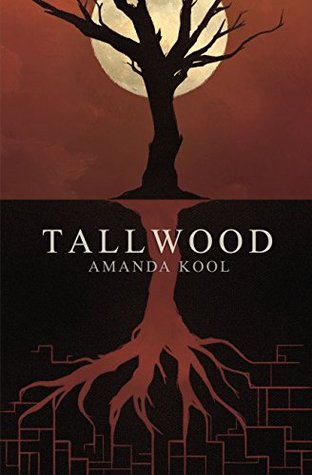 But, even though it’s your first novel, you’ve got a pretty impressive background in writing. You co-authored 1000 Mettle Folds with Australian Horror writer Steve Gerlach and wrote the children’s story, The Paper Fox (illustrated by your brother, Jeremy). The Paper Fox, an interactive story for IOS devices, won critical acclaim for its artwork and design, and garnered the 2014 iKids award for best eBook. Can you tell us a bit about those projects? They sound fascinating!

I owe Steve Gerlach a great debt, because he showed me how to finish a book. I had started a few before that, but never finished one. I had no confidence in my ability to create “a whole thing”. Some really solid stories were just left, half done. So while Steve guided the book, we worked in tandem and it was almost effortless to finish. After that, I wrote my own. Then another, then another.

1000 Mettle Folds was horror in an era we both loved – and shared more than a few allusions to our favourite topic of the day, Jack the Ripper 🙂

Turn 180 degrees to The Paper Fox, a children’s book. This came about because my brother Jeremy, a ridiculously talented artist, created a 3D drawing of a little paper fox, many years ago. Jeremy wanted to create something that featured a set of paper, woodland creatures, and he wanted a story to tie them all together. A few pub meetings later and The Paper Fox was well on its way.

The story follows a paper fox (of course) whose house is in the path of destruction thanks to mysterious earthquakes shaking the land. He sets off to find the cause of these quakes and save his home. He starts off as a haughty little twat, but turns out alright in the end 🙂

Trivia: I was 3/4 of the way through Wires when I picked up The Paper Fox. The Paper Fox took around 18 months (from when I became involved) to complete. Between crowdfunding, grant applications, drafts, choosing voice actors, late-night changes, and testing…I forgot how I was going to end Wires. I had no idea. So I read it from the start as a reader – and then wrote the end. I hope it’s as good as the original.

For all I know it’s the same!

As well as fiction, your day job involves technical writing. How does that affect the way you approach fiction, and vice versa? Are there skills that transfer between the two?

Great question! There are absolutely skills that transfer between the two, not least of which is brevity and using the right words for the job at hand. But Tech Writing is about order, space, organising thoughts into a linear sequence (using non-linear tools), and exposition.

When I write a story, it comes out how it comes out – in fits and starts, out of order and sometimes in a rush of emotion, with words that I don’t even contemplate in my day-job. It’s almost like a weird, subconscious, compartmentalisation.

While there is artifice in Tech Writing (you are certainly beguiling a user to believe your “best practice” methodology over their own), there is very little beauty and certainly no allegory or metaphor or grace.

They are both skills, but writing a book, is more art than science 🙂 I like to let down my logical, structured guard when writing my books. Make sense?

I’m working my way through The Bill Hodges Trilogy (King) at the moment and recently finished a Joe Hill novel, as well as Hamilton, the Musical. Random!

So my “recent” Aussie reads are a good few months back, but Smudgy in Monsterland by Paul Rasche was a winner for me. So freakin’ crazy, it was an in-your-face joy to read.

One other I keep recommending to people is Last Year, When We Were Young, by Andrew J McKiernan. There are some absolute gems in that anthology and a few I haven’t been able to stop thinking about.

I can’t wait to get into The Stars Askew, by Rjurik Davidson; newly acquired! My Kindle has a lot of Aussie/New Zealand authors on it (Cohesion Press, I’m looking at you!) so when I’m done with Bill Hodges, they’re up next.

If I break this answer up into non-fiction and fiction, I can name two!

Foremost, Shelby Foote. He wrote the utterly gorgeous, three-volume The Civil War: A Narrative. It is epic and massive – a million and a half words! One volume will nicely press a block of tofu 🙂 Not only do I have a deep interest and passion for that particular conflict and era, Foote’s words are immeasurably poetic, while at the same time, sparse and haunting.

And also Richard Adams. Watership Down had such an impact on me both in my current love (obsession) with animals and nature, as well as being one of the first books I fell into and almost drowned. I went to another world with that one and it stuck with me.

I’d just like to point out I got through this interview with no swears. Pat on the back.