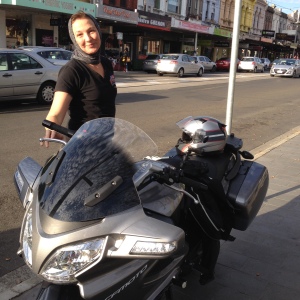 Bren MacDibble writes SF for all ages. She’s a Clarion Souther, a SuperNovarian, and has had short stories in Dimension6, Andromeda Spaceways Inflight Magazine, Orb Magazine, ShiNy, as well as 12 children’s fiction books with educational publishers.Writing as Cally Black, Bren won the 2015  Ampersand Prize for the YA novel In the Dark Spaces. In 2017, her children’s novel How to Bee, set in a future without bees, will be published by Allen & Unwin. Bren lives in Melbourne with her family and works with gifted children during the day and teaches TAFE at night. She also has a habit of riding motorbikes long distances. You can find out more about Bren at www.macdibble.com

You’re probably best known for your writing for younger readers – what is it that draws you to write for kids (of all ages)?

I think childhood is such a vivid time in people’s lives, everything’s big, scary, unfair, and you think you know who you are, because society hasn’t managed to put you in your place yet. So while you’ve got the least control over your life, you actually have an unblemished powerhouse of personality. Many people live their whole lives never as confident again as they were when they were children. So a child, or a young adult picking up defining messages about themselves, is a perfect and really interesting character for fiction.

I guess it was so vivid for me, I still know how to think like a child, and I love writing science fiction that entertains young people that gets them thinking about the future.

When you look back on yourself starting out as a proto-writer, are there any tips you would give past-you?

Don’t be lazy. Don’t get to being a good writer and think that’ll work out for you. Work hard on digging deeper, picking the bones of all who’ve gone ahead of you, and keep learning.

Can you tell us what are you working on at the moment that we might see in the next year or so?

Allen and Unwin are publishing How to Bee in 2017, which is a children’s novel set in a post-famine, beeless Australia. In this future, poor kids are hired to run through the branches of fruit trees with feathered wands to pollinate the flowers (like people do in Sichuan province now). Peony has her heart set on being hired to be a “bee” even though her mother has other plans for her. I’m excited because it’s given me an opportunity to haul out my feral farm kid voice and attitude, and because it’s a novel that can help deal with young readers’ anxieties about the environment.

In the Skin of a Monster by Kathryn Barker is really incredible. Being an identical twin to a school shooter and carrying on living in the same small town is a set up for a rough life, but then to be caught in this fantastical parallel world as well, and told in an amazing voice, it’s gold!

Too many to pick! Maybe Margaret Mahy, given that she’s written across all youth genres and has a whole successful career and life of writing behind her. I could ask her all the questions about work/writing/family balance, as well as talk about her amazing writing and ideas.