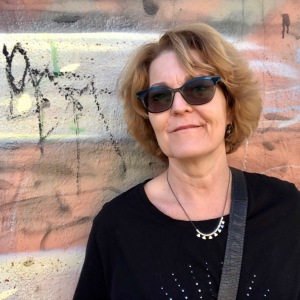 Other career highlights include studying with Margaret Atwood, 73 published short stories, two collections – The Bride Price (2013) and Dark Harvest (2020) and a far future novel, Lotus Blue (2017), which was funded by an Australia Council emerging writers grant.

Cat is a keen traveller currently obsessed with photographing cheeky parrots and grungy walls. She is an active member of Extinction Rebellion.

My new ‘best of’ collection, Dark Harvest, has just been published by Newcon Press, UK. A bittersweet experience all up because the book was slated to be launched at Stokercon, Scarborough 2020, however that entire event became yet another casualty of the global pandemic. So, the collection exists but came into being without the usual accompanying celebrations, which is kind of a bummer. Of course, so many fellow authors have found themselves in similar positions. What I’m hoping most is that publishing itself survives and thrives as we plummet headlong into an uncertain global future. 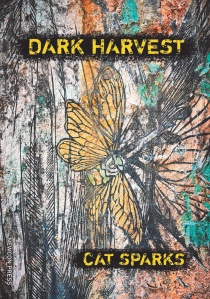 My best publishing experience – or achievement, as I consider it – is definitely a toss-up between delivering my science fiction novel, Lotus Blue, and my PhD: Capitalocene Dreams: Dark Tales of Near Futures & The 21st Century Catastrophe: Hyper-capitalism and Severe Climate Change in Science Fiction. Both works nearly killed me whilst simultaneously teaching me an enormous amount about the craft of writing and the catastrophic state of the planet we live on. Undoubtedly, I’m a better writer as a result of both, but I’m also very much changed by those experiences. This year I’m finding it very difficult to engage with the form, despite my head exploding like fireworks with so many great and terrifying ideas. Everything seemed easier when I was more ignorant and less skilled. I guess that pretty much sums up life though, doesn’t it? I’ve been doing a lot of photography, a form of artistic crop rotation while I recalibrate the word-based regions of my brain and get up the nerve to start a new bunch of stories.

Lockdown has given me plenty of quality reading time. I can highly recommend the following debuts: Monstrous Heartby Melbourne author Claire McKenna; Repo Virtual by another Melbournite – Corey J White. Then there’s Ghost Species by James Bradley, Into Bones Like Oil – a novella from Kaaron Warren. Songs for Dark Seasons, a new collection from Lisa L Hannett. A picture book – The Giant and the Sea by Trent Jamieson, illustrated by Rovina Cai. Plus the best short sci fi story I have read in ages, ‘Riding the Snails’ by Jason Fischer, from an anthology called War of the Worlds: Battleground Australia, published by Clan Destine Press. And if you’re looking for something extremely lovely to listen to, hop onto Youtube and check out Tree Song by Adelaide The Girl, produced to accompany Isobelle Carmody’s Little Fur series.