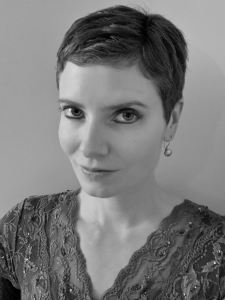 Melanie Harding-Shaw is a speculative fiction writer, policy geek, and mother-of-three from Wellington, New Zealand. Her short fiction has appeared in local and international publications such as newsroom, Daily Science Fiction and The Best of British Fantasy 2019. Her Censored City novelette series is available on Amazon and Book Depository. In her ‘spare time’, she wrangles Wellington speculative fiction writers to meet at the pub and helps out as NZ Writer Liaison for CoNZealand—the 78th World Science Fiction Convention. She is a finalist in four categories in the 2020 Sir Julius Vogel Awards. You can find her at www.melaniehardingshaw.com on Facebook @MelanieHardingShawWriter and on Twitter @MelHardingShaw.

In April, I published the final book in my Censored City trilogy of near-future thriller novelettes, which started with Would She Be Gone last year. Each book sequentially carries on the story from a new point of view following three women whose choices will make the difference as to whether their world tips into Orwellian dystopia. It explores the role of police, elected officials, and the media in perpetuating and exacerbating wrong decisions made for what started as “right” reasons.

In May, my horror story ‘Synaesthete’ was published in the charity anthology Black Dogs, Black Tales. This was also the first time I’ve had the privilege to work on an anthology as an Assistant Editor. It is an awesome varied collection of dark stories, poems, and artwork that all feature dogs (don’t worry, none of the dogs die) with all proceeds donated to the Mental Health Foundation of New Zealand. The donations from the anthology sales are also matched by Microsoft, so please support if you can!

And in June, I was honoured that my story ‘The Fisher’ (first published by newsroom) appeared in The Best of British Fantasy 2019 and will also be reprinted in Year’s Best Aotearoa New Zealand Science Fiction and Fantasy Volume 2 later this year.

2. What has been the best publishing or SF community experience of your career so far?

The best SF community experience I’ve had so far is the amazing in-person and virtual speculative fiction support networks I’ve developed in the last year. They started with some super welcoming writers on Twitter and my very tentative attempts to meet people at my first NatCon in 2019 and I now convene monthly drinks for of my local Wellington speculative fiction writers and admin a small online network of speculative fiction writers who I feel so lucky to be supported by and learn from. And I’m even luckier to count many of them as friends now as well. Writing can be a lonely and sometimes frustrating experience and it makes such a difference when you find your people.

So, I’m going to cheat a bit here and put in a plug for a couple of collaborative open-access spreadsheets I collate to make award reading easier for everyone. They include a large proportion of NZ releases from 2019 and 2020. Go check them out and please add any works by New Zealanders that are missing. If I had to pick one to recommend, I’d direct people to Paper Road Press’s Year’s Best Aotearoa New Zealand Science Fiction and Fantasy Volume 1 for a great cross-section of our short fiction. And keep an eye out for Volume 2 which should be released shortly!